Should We Really Move Public Works 10 Miles off the Island? 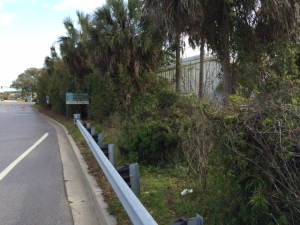 Jimmy Ward would like the IOP to spend over 1 million dollars to move the Dept of Public Works off the island. 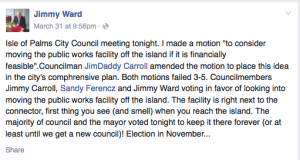 Jimmy says the building is unsightly, smelly and the land will need some environmental mitigation to ensure it is not contaminating Hamlin Creek.

Look at the above connector pictures.  I bet you, like me, have never even noticed the building as you came over the bridge, except at Christmas when there is a light bulb Santa on it.  The fact is the building is not visible until you are almost off the bridge, and then only for a split second.

Here is what Jimmy is not telling you in his Facebook post.  He has said that Long Point Road would be a good location.  Not only would this be terribly inconvenient, it would be terribly expensive.  The city has already conducted a preliminary evaluation of keeping the department where it is and doing environmental remediation.

The numbers come from a March 4 memo written by Douglas Kerr, Director of Building and Planning.

Finally, not only is this a nutty idea, but, because 1 councilmember thought it a good one, hours and hours of staff time were burned up to satisfy this quixotic idea.

Mr. Ward, you are free to keep the ideas coming, but please quit calling yourself a “fiscal conservative.”