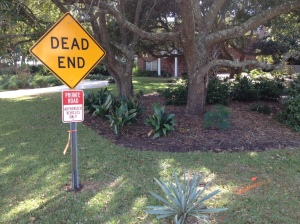 Does anyone remember these signs that were briefly displayed on 52nd Avenue in the fall of 2012?

Well, here is the story.  The information that follows is taken from court documents in the lawsuit the residents of this street have filed against the city.  You can find them at http://www.charlestoncounty.org.  Go to the section dealing with cases in the circuit court and put in the case # 2014CP1002090.  The case was filed on 31 March 2014 and is 50 pages in length.  There are quite a few documents associated with the suit and they make for fascinating reading!

OK, here is the gist of the story.  The dudes on 52nd didn’t want any daytrippers parking on their street.  But what to do?  First they formed a non-profit corporation named Beach Property Owners Association on 09 August 2012.  Once formed they persuaded the Beach Company (Charles Way) to sign a quit claim form on 10 September 2012.  Of note to some of you political insiders reading this, the form was notarized by none other than Nick Sottile!

Well, it didn’t take long for the city to say, “Just one minute, boys, we own that street!”  The city took the signs down and the Association decided it was time to lawyer up.  And thus, about a year and half later, the Association filed a lawsuit against the City of IOP and the SC DOT to clarify that 52nd Avenue is a private street.

It was kind of a harebrained scheme to begin with, but, hey, it was worth a shot.  As for the lawsuit, the city is being defended by Brent Halversen.  And you, fellow IOP resident, are paying for this defense of this ridiculous lawsuit.

PS.  If I can find the time, I will comment on some of the fascinating documents associated with this case.